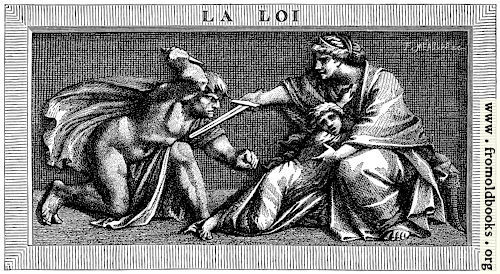 The title means, The Law: The weak find strength in the law that protects them.

This image was used as a filler at the end of chapter twenty-two in a section on Victor Hugo’s banishment from France. The French artist Pierre-Paul Prud’hon (1758 – 1823) made three drawings for the Committee of Public Instruction in 1794: Liberty, equality and law. This picture is the third of the three drawings.

The engraving in this book is signed by Fortuné-Louis Méaulle but was actually originally engraved by Jacques-Louis Copia.

I found a copy of the image here that has a caption, in Swedish, Lagen. Allegorisk komposition efter Prudhon. Gravyr af Copia. Den svage finner sin styrka hos lagen, som beskyddar honom, which Google tells me is The Law. Allegoric composition after Prudhon. Engraving of Copia. The weak finds his strength in the law, which protects him.

Many thanks to Stefan Zenker for identifying the original source of this image.