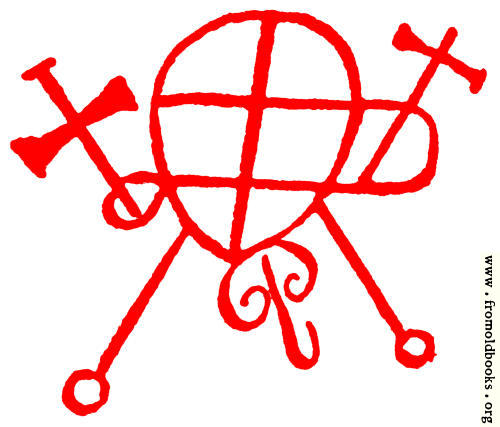 1. The Seal of Baal more

I. Baal, a king ruling in the East, who imparts invisibility and wisdom. He appears with a human head, or with that of a toad or cat[1], but sometimes with all at once. He speaks with a hoarse voice [1].

Note 1. The cat is the traditional domestic favourite, not only of those who diabolise, but of the diabolical world itself, which shews that after all there is a strong link with humanity in the cohorts of Lucifer. The reader will remember that the cat falls on its feet, not by natural good luck, but by the special dispensation of Mohammed, and that the favourite of the Prophet is in Paradise, no doubt on the best terms with the dog of the Seven Sleepers.

I coloured the symbol red although the book (or my copy of it at least) is printed entirely with black ink.