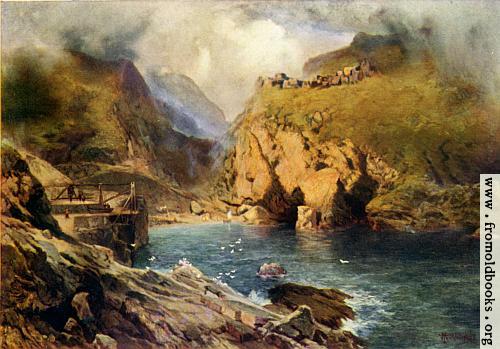 “After we reached the hotel, the long twilight still gave time to contemplate the weird beauty of the surroundings and to explore the ruins of the castle so famed in song and story. We scrambled down the high headland, upon which the hotel stands, to the level of the blue inlet of the sea, depicted in such a masterly manner in the painting by Mr. Moran, the towering cliffs crowned by the fragmentary ruins looming far above us. A path cut in the edge of the cliff leads to a precarious-looking foot-bridge across the chasm and a still narrower and steeper path hugs the face of the precipice on the opposite side until a heavy oaken door is reached. This door, to which the old caretaker in the cottage below had given me the key, opens into the supposed site of King Arthur’s castle. Only a few scattered bits of masonry remain and these are probably of a later time than that of the early Briton.

The spot is lonely and quite barren save a few patches of greensward upon which were peacefully grazing a flock of sheep—one finds them everywhere in Britain. I was quite along—there were no other visitors at that late hour and my companions had given up the dizzy ascent before it was fairly begun—and I strove to reconstruct in imagination the castle as it stood in the days of the blameless king. How the wild old stories crowded upon me in that lonely twighlight hour! Here, legend declares—and I care not if it be dim indeed and questioned by the wiseacres—was once the court of the wise and faultless Arthur, who gathered to himself the flower of knighthood of Christendom and was invincible to all attacks from without, but whose dominion crumbled away before the faithlessness and dishonour of his own followers. Here, perchance, the faithless Guinevere pined and sighed for her forsworn lover and gazed on the sea, calm and radiant as it is even now, or saw it lash itself into unspeakable fury upon the frowning bastions of the coast. But alas! how dim and uncertain is all that is left.” (pp. 72 – 74)

The ilustration also bears the caption, From Original Painting by Thos. Moran, N. A.