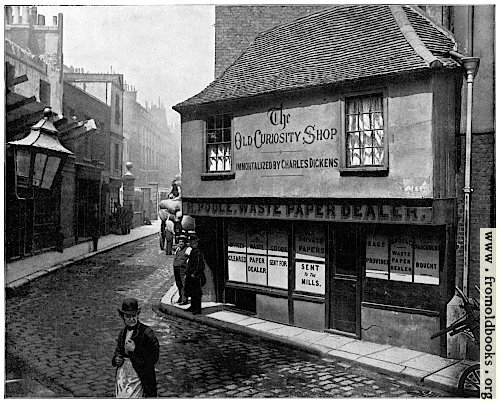 In a letter by Charles Tesseyman, which was published in the Echo, a popular London evening paper, on 31 December 1883:

“My brother, who occupied No.14 Portsmouth-street between 1868 and 1877, the year of his decease, had the words ‘The Old Curiosity Shop’ placed over the front for purely business purposes, as likely to attract custom to his shop, he being a dealer in books, paintings, old china, &c. Before 1868 – that is, before my brother had the words put up – no suggestion had ever been made that the place was the veritable ‘Old Curiosity Shop’ immortalised in Dickens.”

The shop had belonged to an art dealer when the first part of the claim was painted; the part naming Dickens seems to have been added after the art dealer’s death, when the waste paper dealer moved in.

Today the shop is still there and sells Dickens memoriabilia, among other things.

Charles Dickens, in the realm of fiction, has given to the English-reading world a host of veritable friends. The heroes or most other novelists amuse, instruct or entertain us, but quickly fade into oblivion, like chance acquaintances. But to the genuine lover of Dickens his characters are not fictitious—they are real. We laugh with them, we cry with them, we love their virtues, we forgive their frailties, till they are sealed to us as life-long friends. Nor is this all; for Dickens’ characters are usually linked to certain places which he selected with great care, and sketched with wonderful fidelity. It is in fact this vivid picturing of place and person that makes it a continual pleasure to trace his works in that great World’s Metropolis, of which he was so fond. Thus, of late years, books have been written for this special purpose, and by the aid of these we may spend days in London itself, to say nothing of rural England, noting all sorts of odd localities, streets, houses, inns and churches, such as the quaint sign which suggested to Dickens his idea of Little Nell’s “Old Curiosity Shop” to the house where Mr. Tulkinghorn resided or even the church-yard gate, beside which lay the lifeless body of poor Lady Dedlock. “Charles Dickens’ London,” therefore, and “Through England with Dickens,” should never be omitted from the library of any European tourist who loves the creator of “David Copperfield,” “Little Dorrit,” and the immortal “Pickwick.” (p. 131)