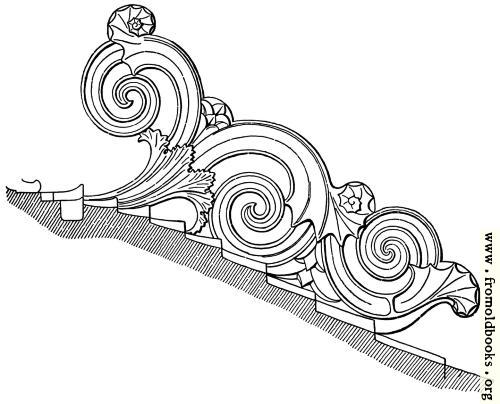 89. Corinthian Order.—In Fig. 55, however, is shown a section of ornament from the choragic monument of Lysicrates at Athens. This is the principal structure of Greek origin designed in the Corinthian order. fig. 55 is an ornament from the top of the above monument, and shows not only the elaboration of ornament characteristic of this order, but also a principle of ornamental design that is of the utmost importance in its relation to the lack of invention of new forms and the restraining influences of certain art periods.

It will be observed here that the various parts of the acanthus scroll grow out of one another in a continuous line. This is a principle of design that originated with the Greeks, and was continued by the Romans, after which, as we shall see, it was abandoned, and the abandonment of this simple principle was sufficient to generate an entirely new order of forms and ideas. (p. 64)