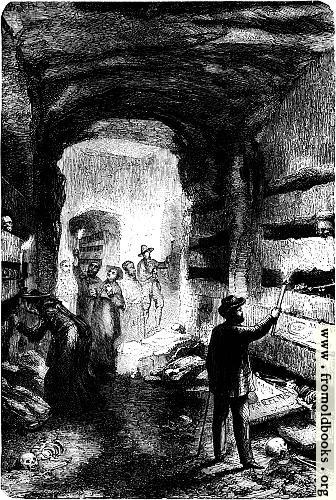 The Catacombs of Naples, in Naples,Italy more

The Catacombs of Naples

The Catacombs of Naples are of great interest even after those of Rome; they are said to extend for several miles underground; and they consist of broad arched passages hollowed out of the rock, containing on either side niches which once contained the bodies of the dead. They were without doubt [says Rodwell] excavated by the early Christians; many Christians emblems are painted upon the walls, sometimes in a very rude manner. In some places the original fresco has been covered with a coating of plaster, and a second fresco has been painted over the first, occasionally even a third. (p. 141)