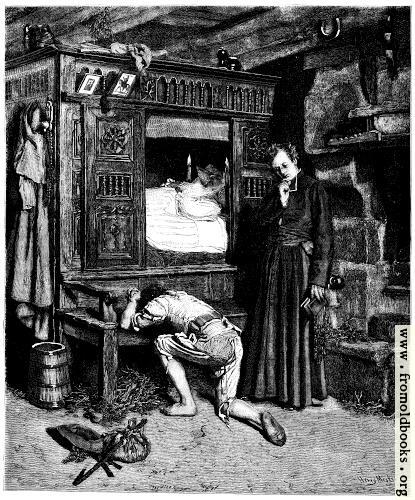 A young man, barefoot and dressed in rags, is half-kneeling, his head in his hands, at a bench in front of an enclosed bed, on which sleeps, or perhaps is dead, an old man. A priest holding a book looks disdainfully at the boy, who by the walking-bag and hat on the ground next to him has clearly hurried to arrive.

The picture has also been entitled, La Retour, the Return; this has been linked to the return of the prodigal son, although the painting does not seem to fit the Biblical story of that name very well.

Which is, from the Salon, or Paris art exhibition of 1879, Too late!, engraved by Matthew after a painting by Henry Mosler. Reproduced [at the time] with permission from the Goupil estate.