St. John in the Isle of Patmos.details 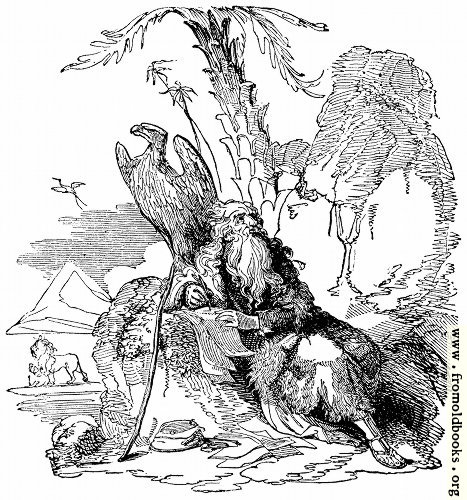 St. John in the Isle of Patmos., in Patmos, Greece more

St. John in the Isle of Patmos.

Saint John the Evangelist is shown writing onto sheets of paper with a large eagle behind him; a staff and pouch are at his side, and he wears animal skins and sandals. He hasa long white beard.

This was St. John the Evangelist, though his name stands with Ante Port. Lat. annexed to it in the church of England calendar. The description is founded on a Roman Catholic legend that St. John the Evangelist in his old age was accused of atheism to Domitian, who sent him to Rome, and there, before the gate called Porta Latina, caused him to be put into a cauldron of boiling oil, from whence he suffered no pain, and came forth without harm. This miracle is fabled to have occurred before the exile of St. John to the desert isle of Patmos, in the Archipelago, where he is supposed to have written the Apocalypse, or book of “Revelations.”

There is no evidence that St. John suffered martyrdom; on the contrary, he is said to have returned to Ephesus in the reign of Nerva, who succeeded Domition in the imperial dignity. Painters usually represent him in Patmos with an eagle by his side; though, as St. John Port Latin, there are many engravings of him in the legendary oil cauldron. Other representations of him put a chalice in his hand, with a serpent issuing from it, founded on another legend, that being constrained to drink poison, he swallowed it without sustaining injury.

There is a further legend, that while St. Edward the Confessor was dedicating a church to St. John, a pilgrim demanded alms of him in the saint’s name, whereupon the king gave him the ring from his finger. This pilgrim was St. John, who discovered himself to two English pilgrims in the Holy Land, bidding them bear the ring to the king in his name, and require him to make ready to depart this world; after this they went to sleep. On awakening they found themselves among flocks of sheep and shepherds in a strange place, which turned out to be Barham Downs in Kent, wherefore they thanked God and St. John for the good speed, and coming to St. Edward on Christmas-day, delivered to him the ring with the warning; these the king received in a suitable manner, “And on the vigyll of the Epyphanye, next after, he dyed and departed holyly out of this worlde, and is buryed in the Abbey of Westmester by London, where as is yet unto this daye that same rynge.” Again it is said, that Isidore affirms of St. John, that he transformed branches of trees into fine gold, and sea-gravel into precious stones, with other like incredibilities. [Golden Legend] (p. 617)