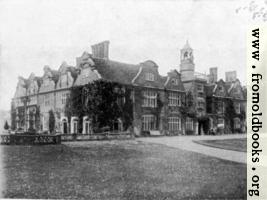 
“About the same distance from Sandridge to Water End in the opposite direction stands another typical semi-Elizabethan and Jacobean mansion, which, far from degenerating in its old age, has put on a new lease of prosperity, for, as a trasure-house of antique art in the way of carved oak, there are few houses to rival it. And this is little wonder, considering the enthusiasm as a collector of the eminent [...] polished courtesy and modest pride would conduct fellow enthusiasts round the “linen” panelled rooms, pointing out the peculiarities and beauties of the mediæval and Renaissance workmanship displayed on every side. Here one may study elaborate oak carvings from base to foor: every conceivable form, from the ruggedly chiselled type to the most delicately handled. Nothing is modern. To the most original wainscoted rooms have been added some of the grand old fireplaces from Rawdon House, Hoddesdon (which since its conversion into a nunnery has been shorn of some of its finest fittings, saving the remarkable staircase still in situ). the Rothamstead doll’s-house, as big as a couple of German travelling trunks of the largest dimensions, with which nearly a dozen generations of children have played, like the house in which it stands, has in its several apartments carved oak over-mantels stretching from floor to ceiling with coeval accessories to instruct and doubtles bewilder the successive sprouting branches of the Lawes-Wittewronge tree.” (p. 17) [more...] [$] 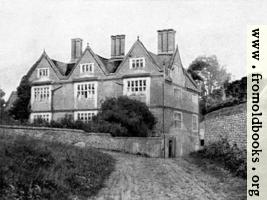 
“The village of Sandridge, close by [St. Albans], prides itself upon the honour of being “Mrs. freeman’s” birthplace, regardless of the fact that Burwell Park in Eastern Lincolnshire puts in a similar claim. The actual house in Hertfordshire, according to local traition, is Water End, a late Tudor house of the style rather prevalent in this part of the shire, stone mullions [...] [more...] [$] 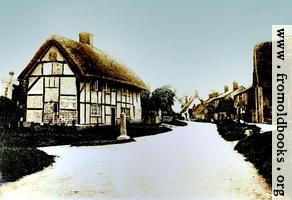 
This is a version of the Frontispiece sepia-tinted photograph of Denchworth that I coloured using The Gimp. [more...] [$] 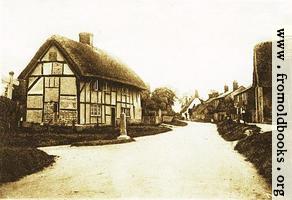 
“Denchworth [...] is one of the prettiest villages hereabouts. What little there is of it consists of one short street lined mostly with timber framed and straw-thatched cottages. As one advances from the north and west further to the south-east, it is [...] place to the more snug-looking lath and plaster, half-timber, herring-bone red brick, and thatch. [more...] [$] 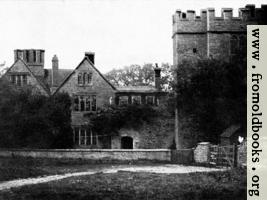 
“Astwell Castle stands aloof from the road across some meadows. At the back of the old water-mill is a picturesque reed-grown stretch of water, and beyond on the higher ground may [...] Tudor building. Viewed from this distance, it looks quite like a bit of Haddon, but nearer inspection shows two distinct styles: the more grim Early Tudor of the tower, and the homelier-looking present dwelling portion with the usual Elizabethan gables and mullions. Some curious carved oak-work over the entrance gate is dated 1638, and above that, upon a shield of arms, is the year 1607, yet neither of these can be accepted as the period when the building was erected.” (p. 75) [more...] [$]

Images from Quiet Roads and Sleepy Villages by Allan Fea (New York, 1914). I bought this book on eBay.