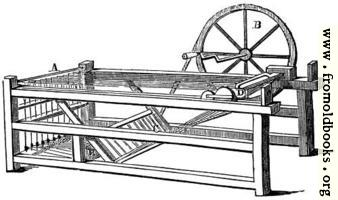 
The Spinning Jenny as shown here was originally invented by James Hargreaves in 1766; like Samuel Crompton who invented the mule-driven version, the mule jenny, James Hargreaves died without much money, despite the huge contribution of both machines to the Industrial Revolution in England. [more...] [$] 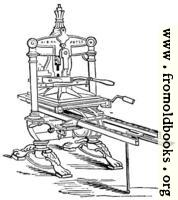 
“Very little improvement in the construction of this instrument took place from the first introduction of the art into Europe till the late Earl Stanhope applied the powers of his mind to the subject, and introduced a new press of a decidedly superior construction. The old press was made of wood, with an iron screw that had a bar fitted in it; to the [...] face of the types; and thus the impression was obtained. This press has, however, entirely given place to presses made of iron. [more...] [$] 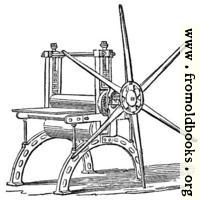 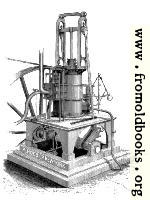 One of the well-known men of the city passed away yesterday when Dr. Thomas Antisell breathed his last. The news of his death, as announced in yesterday’s Star, came to his numerous friends with none of the suddenness of an unexpected shock. For some time past his condition has been such that his death might have occurred at any time. Three years ago he had a stroke of paralysis and the disease has been progressive ever since. At the time of his death, which occurred at his home, 1311 Q street, his daughters, Miss Antisell and Mrs. Cruikshank, were with him. Dr. Antisell leaves a family of two sons and six daughters, William Mackey Cruikshank, one of five grandchildren, graduated with honors from West Point only a few days ago.

The funeral services will be held tomorrow afternoon at 3 o’clock from the late residence. The interment will be made at the Congressional cemetery. The honorary pallbearers will be Dr. Lovejoy, Dr. J.M. Toner, Dr. Louis Mackall and Mr. Richard Oulahan, with four members of the District Medical Association. The active pallbearers will be Major William Plunkett, Benjamin Butterworth, James L. Norris, W.H. Baldwin, Edward Farquhar, Assistant Surgeon General Greenleaf, Dr. A.A. Snyder and Charles Lieberman.

Dr. Antisell had a distinguished career. He was born in Ireland in the year 1817, and belonged to a well-known family. From his early student years, which were spent in the best schools of Ireland, England and Germany, his special study was chemistry. He, however, secured a thorough medical education and entered upon the practice of his profession in Dublin, where he also held the position of lecturer of chemistry in the Dublin School of Medicine. Owing to his connection with the young Ireland party he was obliged to leave his native country in 1848. He came to this country and practiced his profession in New York and also lectured on chemistry in various colleges. Several years before the breaking out of the war he was appointed to the position of principal examinar in the patent office in charge of the chemical division. He entered the volunteer service of the Union army as a brigade surgeon. He was afterward medical director of the twelfth army corps, finally receiving the rank of brevet lieutenant colonel for faithful and efficient service.

In 1871 he went to Japan as technologist in the government commission appointed to develop the resources of the northern islands of that empire. He served there six years. He was a member of a number of scientific societies and was at all times in request as a lecturer before scientific institutions. He had been a contributor to scientific literature since his student days, and his works cover a wide range of technical subjects, one of the best known being his “Home Encyclopedia of Arts and Manufacture.” His works are regarded as standard. He had been connected with the Georgetown University for thirty years and received from that institution the degree of doctor of philosophy. He resumed his connection with the patent office, which continued until disease rendered him incapable of much active work.