Reverse of A & P trade carddetails 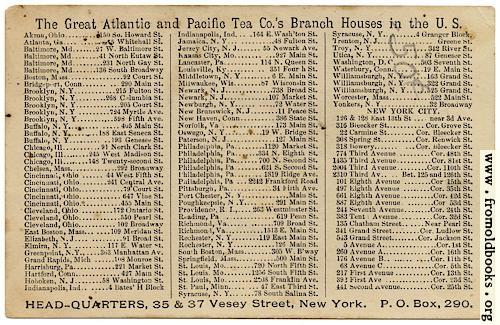 Reverse of A & P trade card

The back of this trade card lists all of the Great Atlantic and Pacific Tea Co.’s branch houses in the USA. By 1925 there were 14,000 stores and by 1937 A&P opened its first supermarket; it’s still one of the largest grocery store operators in Norh America. But at the time of this trade card there were only approximately 110 branch houses. Chicago branches are mentioned, and they opened after the Great Fire there of 1871. One hundred stores existed in 1876, so I’d guess 1880 to 1890 for this card. By 1900 there were 200 stores.

See also this history of the Great Atlantic and Pacific Tea Company.