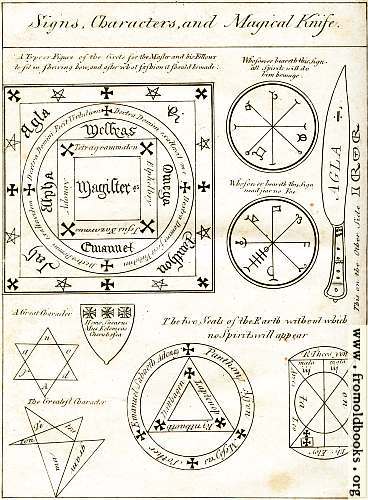 Text above the scanned part reads, Ingrav’d for Sibleys Astrology Noº59

Text below the scanned part says, Published for the Proprietors by C Statker Nº4 Stationers Court.

The dimensions of the circle is [sic] as follows: a piece of ground is usually chosen nine feet square, at the full extent of which parallel lines are drawn one within another, having sundry crosses and triangles described between them, close to which is formed the first or outer circle; then, about half a foot within the same, a second circle is described; and wihin that another square correspondent to the first, the centre of which is the seat or spot where the master and associate are to be placed. The vacancies formed by the various lines and angles of the figure, are filled up with all the holy names of God, having crosses and triangles described betwixt them agreeable to a sketch I have given in the annexed plate, where likewise I have projected the form of magic seals, pentacles, &c. &c. just to give the reader an idea of what is meant, whenever we have occasion to speak of them in the following discourse.” (p. 1103)