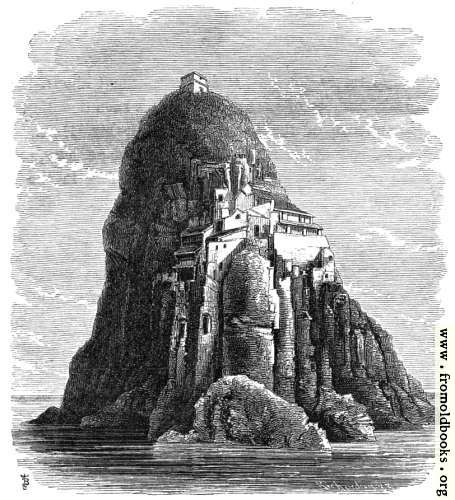 Two hundred and fifty miles above nanking, the [Yang-tse-kiang] river flows swiftly through a narrow gorge between two mountains, one called the Eastern, the other the Western Pillar. Above this strait the river winds, and is flanked on the right bank by bluffs like those of the Mississippi and Missouri; a hundred miles higher, another gorge; near the left bank, a conical islet, four hundred feet high, rocky at the base, but smiling with vegetation at the top, the sides indented withe winding terraces bordered with Buddhist cloisters, on the summit a picturesque pagoda. The rock is named, in the chart, “Little Orphan.” Opposite it is the pretty town of Tung-Lu, with a picturesque wall winding over the undulating mountain-crest. [pp. 230-1]