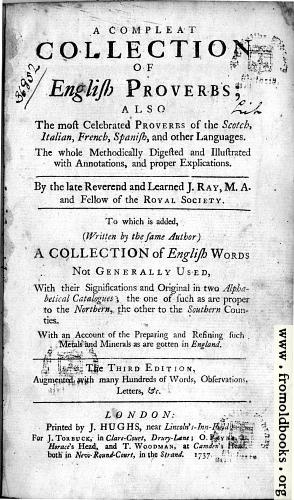 a compleat
COLLECTION
of
English Proverbs;

The most Celebrated Proverbs of the Scotch,  Italian, French, Spanish, and other Languages.

The whole methodically Digested and Illustrated with Annotations, and proper Explications.

By the late Reverend and Learned J. Ray, M.A.

and Fellow of the Royal Society.

To which is added (Written by the same author)

A COLLECTION of English Words
Not Generally Used,
With their Significations and Original in two Alpha­betical Catalogues; the one of such as are proper to the Northern, the other to the Southern Coun­ties.

With an Account of the Preparing and refining such Metals and Minerals as are gotten in England.

The Third Edition,
Augmented with many Hundreds of Words, Observations, Letters, &c.

Printed by J. HUGHS, near Lincoln’s-Inn-Field,
For J. Torbuck, in Clare-Court, Drury-Lane; O. Payne,
Horace’s Head, and T. Woodman, at Camden’s Head, both in New-Round-Court, in the Strand. 1737.

There is also a library stamp on the title page.