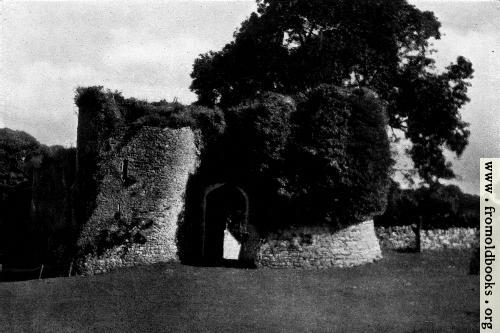 This is the largest, but not [according to Sir Charles Oman] the most interesting, of the three castles of Gower. For though its enciente, round keep and gate-house are standing, it as as mere masses of rubble, all the ashlar and carved stonework having been most carefully peeled off the rough cores within. It stands about a mile and a half from the sea, on a plateau at the head of a deep coombe, which runs down through woods to Oxwych Bay. Its back is toward a cliff or very steep descent on the south: part of its east front is guarded in the same way. The front containing the gate-house looks north toward the inland. Like so many other castles it is not places on the highest available spot—there is higher ground some 200 yards up the plateau, facing the great north gate.” (p. 185)

The keep may date from the late Norman period (towards the end of the 12th century). The same family has lived on the land for no less than twenty-nine generations, according to the Penrice Castle Web site.