Frontispiece: “Yes, there he sat, on the back of the winged horse!”details 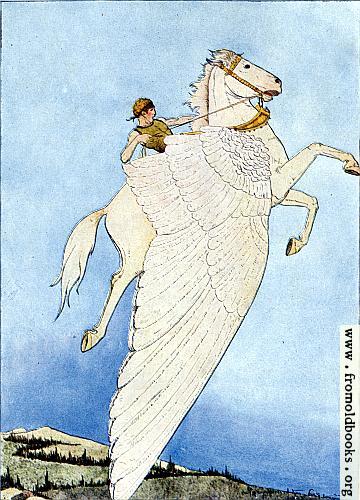 Frontispiece: “Yes, there he sat, on the back of the winged horse!” more

Frontispiece: “Yes, there he sat, on the back of the winged horse!”

At length—not that he was weary, but only idle and luxurious—Pegasus folded his wings, and lay down on the soft green turf. But, being too full of aërial life to remain quiet for many moments together, he soon rolled over on his back, with his four slender legs in the air. It was beautiful to see him, this one solitary creature, whose mate had never been created, but who needed no companion, and, living a great many hundred years, was as happy as the centuries were long. The more he did such things as mortal horses are accustomed to do, the less earthly and the more wonderful he seemed. Bellerophon and the child almost held their breath, partly from a delightful awe, but still more because they dreaded lest the slightest stir or murmur should send him up, with the speed of an arrow flight, into the farthest blue of the sky.

Finally, when he had had enough of rolling over and over, Pegasus turned himself about, and, indolently, like any other horse, put out his fore legs, in order to rise from the ground; and Bellerophon, who had guessed that he would do so, darted suddenly from the thicket, and leaped astride of his back.

Will Martin made a slide presentation template for Eric Meyer’s S5 using the horse, and called it Perseus.