Nothing but a pack of cards!details 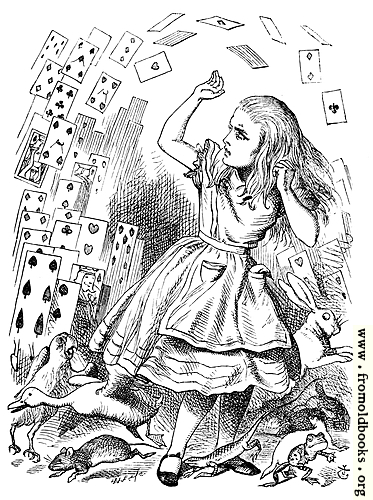 Nothing but a pack of cards! more

Nothing but a pack of cards!

‘Off with her head!’ the Queen shouted at the top of her voice. Nobody moved.

‘Who cares for you?’ said Alice, (she had grown to her full size by this time.) ‘You’re nothing but a pack of cards!’

At this the whole pack rose up into the air, and came flying down upon her: she gave a little scream, half of fright and half of anger, and tried to beat them off, and found herself lying on the bank, with her head in the lap of her sister, who was gently brushing away some dead leaves that had fluttered down from the trees upon her face.