Antique engraving of a hippopotamusdetails 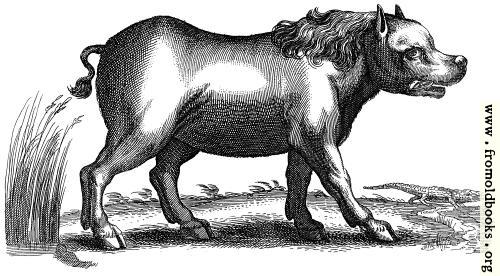 Antique engraving of a hippopotamus more

Antique engraving of a hippopotamus

Jonstonus, Joannes: “A description of the nature of four-footed beasts” (1678)

This rather unlikely picture of a hippopotamus was engraved on brass and included in the 1678 edition of this book. The description in the book, which I have transcribed here, mentions that the hippopotamus’ teeth are so sharp that they send forth sparks; that the hippopotamus walked backwards so as to annoy hunters; and that they were not certain whether it neighed like a horse! I have added some paragraph breaks in the text that follows, for readability.

Following Aristotle, hether I refer the River-Horse; though others, and perhaps more properly, to another head. Hee is called an Horse, not from his shape, but his greatnesse. Hee is stiled the Horse of Nile, and the Sea-ox, and the Sea-hog, that afore resembles an ox, in the rest of the body, a swine: called a Sea-Elephant, from his vastnesse, and the whiteness, and hardnesse of his teeth; and the Elephant of Egpt, the Rosmarus, the Rohart, the Gomarus, in Pretebans country.

Writers differ in describing him. Some say that hee is five cubites high, and hath ox-hoofs, three teeth sticking out each side of his mouth, greater out then any other beasts, eared, tayled, and neighing like the horse, in the rest like the Elephant; he hath a mane, a snout turning up, in his inwards not unlike a horse, or asse, without hair; taken by boats.

Bellonis saw a small one at Byzantium, cow-headed, beardad, short, and roundish, wider jaw’d than a lion, wilde nostrills, broad lips turning up, sharp teeth as a horse, the eyes and tong very great, his neck short, tayled like a hog, swag-bellied like a sow; his feet so short, that they are scant foure fingers high from the ground. But Fabius Columna describes him most accurately from the carcasse of one, preserved in salt, brought by a Chirurgion called Nicholas Zerenghus from Damiata into Italy; hee saith, that he was liker an ox then a horse, and about that size, leg’d like a bear, thirteen foot long from head to tayl, foure foot and an half broad, three foot and an half long, and three foot round; his foot a foot broad, the hoofs each three inches, groutheaded, two foot and an half broad, three foot long, seven foot about in compasse, his mouth a foot wide, snout-fleshy and turning up, little-eyed, each an inch wide, and two long, the ears about three; the bukle thick, the foot broad, parted into foure toes, the ankle hard of flesh, tayled like a tortoys: skin thick, tough, black. The nostrils like an S, snouted as a lion, or cat, with some stragling hairs, nor are any more in the whole body, in the under-chap, thwart half a foot long, &c. like a boar-tucks, not sticking out but plainly seene, the mouth opening, &c. On each side seven cheek-teeth, thick, broad, and very short. In the upper-chap, which he moves like a crocodile, wherewith hee chews, stand six fore-teeth, aptly answering those beneath, &c. The teeth are hard as a flint, and will strike fire, so that by night rubbing his teeth, he seems to vomit fire.

His proper place is said to be Saiticæ in Egypt. There are of them also in the River Niger, and in the Sea that washes Petzora. Barbosa hath seen many in Gofala.

He observed many there comming forth of the Sea into the pasture-grounds, and returning again: they feed also on ripe corn, and yellow-ears. When he is grown up, he begins to try hs strength with his Sire, if he can master him, hee then proved his masteries with the Dam, and leaves his Sire; if he offer to resist, he kills him.

They bring forth young on the dry land, and there brings them up: They are so fruitful, that they teeme every year. He comes out of Nilus into the fields, and having filled his belly with corn, he returns backwards, that the husbandmen may not surprize him, or by his averse footing to amuse the hunts-men; since he is as harmful as the Crocodile.

He being overburdened with his own grosse bulk, he rubs himself against the canes, till he hath opened a vein, and having bled enough, he stopps the vein with mud: whether he neigh or no is disputed.

The Ethiops eat him. About the promontory Cabo Lopez in Guinee a Schipper of the Hage and his mates saw it; and in the town Ulibet they saw many of their heads, wherein were teeth of a wonderfull bignesse. One Firmius Seleucius eat an Hippotame. They are also medicinable; the Egyptians use the teeth against emrods, shut or open, tying them on, or wearing a ring made thereof. The Blackmoors use it also as a preservative against a certain disease. Pliny extolls those teeth for a speciall remedy for toot-ache; and the fat against a raging Fever. The ashes of the skin with water smeared, dissolves waxen-kernels. The skin of the forehead slakes lust: the stones dryed, is good against the bite of a Serpent: the parts as otherwise also useful.