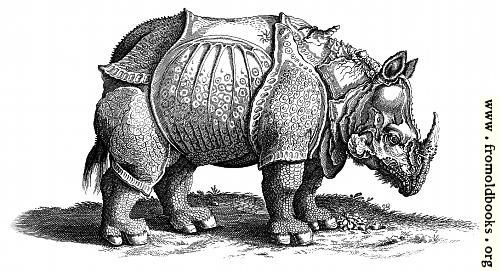 Jonstonus, Joannes: “A description of the nature of four-footed beasts” (1678)

The Rhinoceros borrows his name from the horn in his snout. Some call him an Ægyptian Ox, some an Æthiopian Bull, but they mistake; for there are none in Ægypt, except by chance. In Æthiopia indeed is a bull like him in the horn, which the unskilfull miscall a Rhinoceros. Authors are most uncertain in their descrtiption of him.

Pliny in short this; that hee hath one horn in his Node, he is as tall as the Elephant, his thighs much shorter, box-coloured. Others add, that he hath a swines-head, an oxes-tayl, the Elephants hew; his horn is two foot long, that he is in the Province of mangus; that he is cold of temper; the horn on the tip of his snowt is sharp, strong as iron, his skin so tough, that no dart can pierce it; that he hath another shorter horn on his right shoulder. Some say, two in his nose, others say, one in his forehead. Some make the horn strait, like a Trumpet, with a black crosse streaked. Some say it is crooked; some flat; some, turning up. Some write that he hath two girdles on his back curling, and winding like those of Dragons; one turning toward his mane; the other toward his loyns. But Bontius, who hath seen the Rhinoceros a hundred times, both kept in Den, and loose in woods, writes that his skin is ash-coloured like the Elephants, very rugged, full of deep folds on the sides, and back, thick of hide, that a Japons sword cannot enter; the folds are like shields, or shells. He is hog-snouted, but not so blunt-nosed, their horn at the end is different according to their age: in some ash-coloured, sometimes black, sometimes white, he is not so long-legged, nor sightly as the Elephant.

He is found in the deserts of Africa, in Abasia, in many parts of Asia, in Bengala, and Jacatra; Not knowen to the Greeks in Aristoteles time; nor to the Romans afore the year D C L C V I after the building of Rome. Some say Augustus shewed on in a Triumph. Some, that Pompey was the first, who presented him in his Palays. he hath a rough tongue, and feeds on grasse, and briars. he holds emnity with the Elephant. He hurts not mankind, unlesse provoked. When he is to fight, he sharpens his horn on the stones: In combate, he aimes at the belly, which he knows to be lost; out of which he lets all his enemies blood. If he cannot come at the belly, the Elephant with his trunk and teeth dispatcheth him. Provoked, he makes no more of a Man and an Horse, then of a flea; he can with his sharp tongue lick a man to death; fetching of skin and flesh to the bare bones. Shoot him, and he with a hideous cry layes all flat, that comes in his way, even the thickest trees. Read stories of his fierceness in Bontius. Hee delights strangely in mud. Being to fight, shee secures her yong one first: Hee grunts like a hog. The Moors feed on his flesh, which is so sinewy, that they had need of iron teeth to chaw it. The skin steeped in wine is given in against malignant feavers. The horne some prescribe against poyson. The dainty ones among the Romand used it in bathing for a cruize; They kept oyl in it for them that bathed: I cannot say there are different kinds of these beasts. Yet they say, there was one takin in Africa, as great as a wild Asse, the horn two cubits long, the feet like the Deers, eared like the Horse, tayled like the Ox. (p. 54)