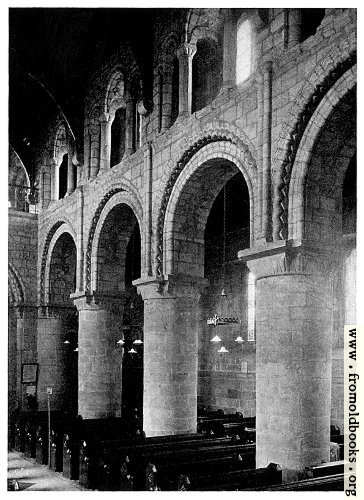 Like the pre-Conquest builders [i.e. before 1066], the Normans knew only one form of arch, th semicicular, with its variants, the segmental (used when the height was limited) and the stilted (46) or horseshoe (which was employed when a taller arch was required). They occasionally employed a lintel over small openings, usually with a relieving arch above it. They seem to have rejected the triangular arch, though the form occurs as a sort of gabled hood mould over a doorway at and .

The stones of a Norman arch never run right through the wall like those of pre-Conquest work. Though plain arches were often cut straight through the wall it was usual to confine the use of cut stone to the edges of the arch, to define the angle, quoin fashion, forming the rest of the arch in rubble (46). Such rches continued in use to the end of the twelth century and perhaps later. They had the disadvantage of requiring elaborate wooden centering during their construction, for the whole thickness of the wall had to be provided with temporary support. (p. 43)

The photographer is given in the acknowledgements as the late Mr. B. C. Clayton, and thus died before 1936, more than 70 years ago, so this image is out of copyright.