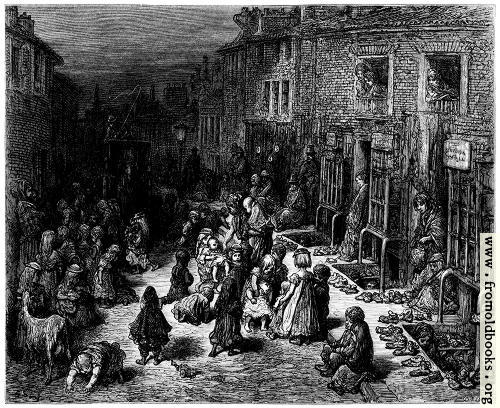 Children play in this crowded street; they are dressed in rags and mostly barefoot.

The peculiar character of these streets, and the close resemblance each one bears to its neighbour, by no means tends to decrease the bewilderment in which the unexperienced wayfarer through ’the Dials’ finds himself involved. He traverses streets of dirty, straggling houses, with now and then an unexpected court composed of buildings as ill-proportioned and deformed as the half-naked children that wallow in the kennels. Here and there, a little dark chandler’s shop, with a cracked bell hung up behind the door to announce the entrance of a customer, or betray the presence of some young gentleman in whom a passion for shop tills has developed itself at an early age: others, as if for support, against some handsome lofty building, which usurps the place of a low dingy public-house; long rows of broken and patched windows expose plants that may have flourished when ‘the Dials’ were built, in vessels as dirty as ‘the Dials’ themselves; and shops for the purchase of rags, bones, old iron, and kitchen-stuff, vie in cleanliness with the bird-fanciers and rabbit-dealers, which one might fancy so many arks, but for the irresistible conviction that no bird in its proper senses, who was permitted to leave one of them, would ever come back again. Brokers’ shops, which would seem to have been established by humane individuals, as refuges for destitute bugs, interspersed with announcements of day-schools, penny theatres, petition-writers, mangles, and music for balls or routs, complete the ‘still life’ of the subject; and dirty men, filthy women, squalid children, fluttering shuttlecocks, noisy battledores, reeking pipes, bad fruit, more than doubtful oysters, attenuated cats, depressed dogs, and anatomical fowls, are its cheerful accompaniments.

The text is from Charles Dickens’ account of London.