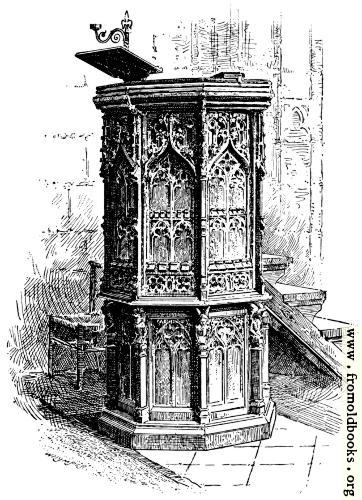 Today John Wycliffe is remembered most for his translation of the Bible; he preached from this stone pulpit in Lutterworth Church.

The last half of the fourteenth century found Leicester again connected with English politics in the person of its earl; and the contrast between Simon of Montfort and John of Gaunt shows the difference between a time of lofty aspiration and a time of national uncertainty. Simon understood the great ideas of his age, and strove to give them practical expression. John of Gaunt allied himself with the uncertain efforts for reform, which took an intellectual shape in the teaching of an Oxford student, John Wycliffe, and tried to use them for the purposes of his own ambition. So long as Wycliffe’s learning supplied Edward III. with weapons for resisting the Papal claims for money, Wycliffe enjoyed the royal favour. He was presented to the living of Lutterworth, where he strove to revive the office of preaching, and undertook his great work of translating the Bible into English. His zeal led him to attack the secular lives of the wealthy ecclesiastics, and to call in question their right to endowments which they did not administer for the good of the Church. It was Wycliffe’s misfortune that John of Gaunt saw in him an instrument for raising an anti-clerical party; and Wycliffe’s teaching suffered from being brought into connection with current politics and social discontent. Wycliffe was accused of heresy, and John of Gaunt appeared as his protector. Resistance to the shifty politics of the one was confused with the objection to the teaching of the other; and the Lollard movement suffered almost at its beginning from its political and social complexion. Englishmen, however, were in that age averse to religious persecution, and Wycliffe died peaceably at Lutterworth in 1384. His influence in Leicestershire was naturally strong, and the town of Leicester had the reputation of being a centre of Lollardy. But Wycliffe’s followers had not clear enough opinions to stand against repression. In 1389 Archbishop Courtenay visited Leicester, and the Lollard teachers confessed their errors, and were absolved. Lollardy was put down, as being a political movement. Wycliffe’s teaching, carried to Bohemia, became more powerful there in the mouth of John Hus than it was in the land which had given it birth. (p. 281)