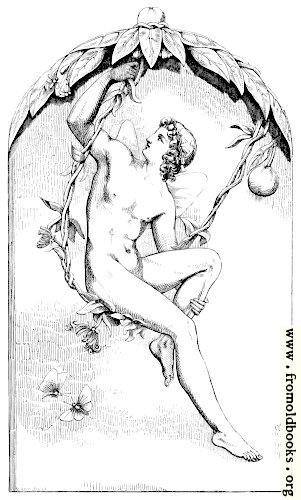 This engraving depicts a sculpture of Ariel from Shakespeare’s The Tempest. It was shown in the eighty-second exhibition at the Royal Academy in 1851, where it was exhibit number 1335; the Art Journal says:

This is a bas-relief of infinite sweetness of character; it shows Ariel, a graceful figure, swinging on the vine of the honeysuckle. the feeling of the composition accords much with that of ‘Titania’, No. 1456. there is a spirit of elegant and refined poetry in these two compositions, as also in other works of this artist. (p. 178)

The picture itself appeared in a later issue, and is marked like this:

Merrily, merrily, shall I live now,

Under the blossom that hangs on the bough.

There is also a separate image that’s just the stone surround for use (for example) as a full-page border.