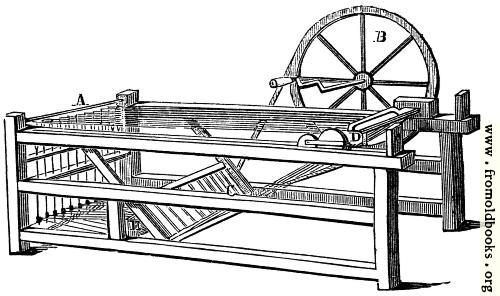 “The mule-jenny was invented by Crompton, of Bolton, England. This machine is so named because it is the offspring, so to speak, of two older machines, the jenny and the water-frame. A mule is mounted with from 240 to 1000 spindles, and spins, of course, as many threads.

The following cut [i.e. woodcut, or figure] represents the original jenny of Hargreaves, by which one person was enabled to spin from 16 to 40 threads at once. The soft cords of rovings wound in double conical cops upon skewers, were placed in the inclined frame at c; the spindles for first twisting and then winding-on the spun yarn were set upright in steps and bushes at a, being furnished near their lower ends with whorls, and endless cords, which were driven by passing round the long-revolving drum of tin plate e. d is the clasp or clove, having a handle for lifting its upper jaw a little way, in order to allow a few inches of the soft roving to be introduced. The compound d being now pushed forward upon its friction wheels to a, was next gradually drawn backward, while the spindles were made to revolve with proper speed by the right hand of the operative turning the fly-wheel b. Whenever one stretch was thereby spun, the clove frame was slid home towards a; the spindles being simultaneously whirled slowly to take up the yarn, which was laid in on a conical copby the due depression of the faller wire at a with the spinner’s left hand.

The yarn being now spun into either fine or coarse thread, is applicable for the warp or weft in woven goods; when the weaving is done at home, it is by hand-loom; when in a factory, it is by power-loom. This process will be followed under Weaving and Texture Fabrics.” (pp. 108 – 9)