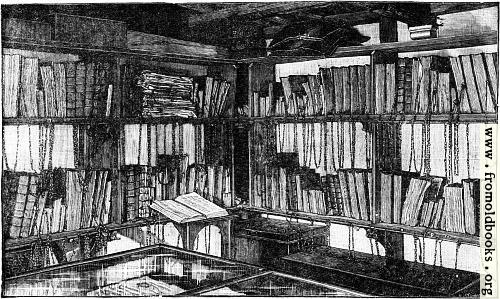 Andrews, William: “Curiosities of the Church: Studies of Curious Customs, Services and Records” (1891)

A library room with glass display cabinets in the middle of walls lined with shelves of chained books.

“In a room of the eastern tower of Wimborne Minster, Dorsetshire, is an important collection of chained books. Mr. H. R. Plomer has recently [c. 1890] inspected this library, and from hs account we gather that it contains some 240 volumes. ‘The books,’ says Mr. plomer, ‘are ranged on shelves round the sides of the room, with their backs turned inwards, each book being attached to the shelf by a small chain fastened to an iron rod.’ The library was formed in 1686, and thegreater part of the works were presented by the Rev. W. Stone, a former rector of the parish. A manuscript volume of prayers, the work of the monks, written in 1343, is the oldest work in the collection [as of 1890]. it is not finished, as the initial letters are omitted. The Breeches Bible, dated1595, strongly bound in wood, is there. Walton’s Polyglot Bible, several well-known commentaries, numerous works of the Old Fathers, Camden’s ‘Life of Elizabeth,’ Barnes’ ‘Life of Edward the Third,’ Chamberlayn’s ‘State of England,’ 1670; also a copy of Sir Walter Raeigh’s ‘History of the World,’ bearing date 1614. Of this latter work, Mr. Plomer says that ‘several pages of this book have been burnt, and tradition has made Matthew Prior, the poet, the culprit; the story being that, whilst reading in the library by the aid of a candle, he fell asleep over the volume, and the candle committed the ravaegs. Judging from the appearance of the holes, it is much more likely that these were made, as suggested by a correspondent of Notes and Queries, with a red hot poker. By whatever mischance the accident occurred, the destroyed part of each page has been neatly patched, and the text restored – that also, and with more probability, a work attributed to Matthew Prior.’

“We reproduce from ‘Bibliographical Miscellanies,’ by William Blades, a picture of the Chained Library in Wimborne Minster, and beg to express our thanks to Messrs. Blades, East, and Blades, for lending the illustration.

“At the Annual Meeting of the Library Association of the United Kingdom, held in London in October, 1889, Mr. William Blades read a paper full of curious out-of-the-way matter on ‘Chained Libraries.’ He refers to Seldon’s books being sent to the Bodleian Library, Oxford, stating that £25 10s. was paid for new chains.” (pp 131ff.)

[I will transcribe more of this on request – Liam]