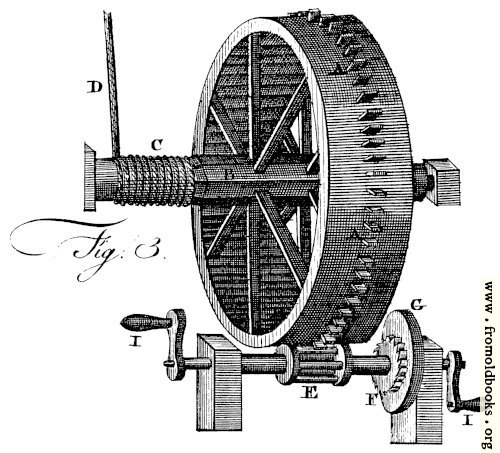 Another very good crane is made in the following manner. AA (fig. 3.) is a great wheel turned by men walking within it at H. On the part C, of its axle BC, the great rope D is wound as the wheel turns; and this rope draws up goods in the same way as the rope HH does in the above-mentioned crane, the gib-work here being supposed to be of the same sort. But these cranes are very dangerous to the men in the wheel; for, if any f the men should chance to fall, the burden will make the wheel run back and throw them all about within it; which often breaks their limbs and sometimes kills them.

The late ingenious Mr Padmore of Bristol, whose contrivance the forementioned crane is. observing this dangerous construction, contrived a method for remedying it, by putting cogs all around the outside of the wheel, and applying a trundle E to turn it; which increases the power as much as the number of cogs in the wheel is greater than the number of staves in the trundle: and by putting a ratchet-wheel F on the axis of the trundle, (as in the above mentioned crane, with a catch to fall into it, the great wheel is stopt from running back by the force of the weight, even if all the men in it should leave off walking. And by one man working at the winch I, or two men at the opposite winches when needful, the men in the wheel are much assisted, and much greater weights are raised, than could be by men only within the wheel. Mr Padmore put also a gripe-wheel G upon the axis of the trundle, which being pinched in the same manner as described in the former crane, heavy burdens may be let down without the least danger. And before this contrivance, the lowering of goods was always attended with the utmost danger to the men in the wheel; as every one must be sensible of, who has seen such engines at work.

And it is surprising that the masters of wharfs and cranes should be so regardless of the limbs, or even lives of their workmen, that, excepting the late Sir James Creed of Greenwich, and some gentlemen at Bristol, there is scarce an instance of any who has used this safe contrivance. (p. 55)