The Fish Footman and the Frog Footmandetails 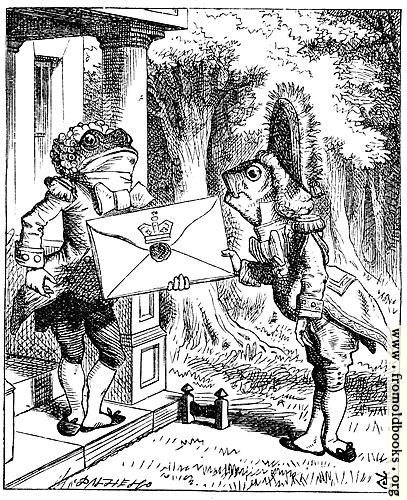 The Fish Footman and the Frog Footman more

“For a minute or two she stood looking at the house, and wondering what to do next, when suddenly a footman in livery came running out of the wood—(she considered him to be a footman because he was in livery: otherwise, judging by his face only, she would have called him a fish)—and rapped loudly at the door with his knuckles. It was opened by another footman in livery, with a round face, and large eyes like a frog; and both footmen, Alice noticed, had powdered hair that curled all over their heads. She felt very curious to know what it was all about, and crept a little way out of the wood to listen.

The Fish-Footman began by producing from under his arm a great letter, nearly as large as himself, and this he handed over to the other, saying, in a solemn tone, ‘For the Duchess. An invitation from the Queen to play croquet.’ The Frog-Footman repeated, in the same solemn tone, only changing the order of the words a little, ‘From the Queen. An invitation for the Duchess to play croquet.’ ”

The image is signed Dalziel (the engraver) and JT.