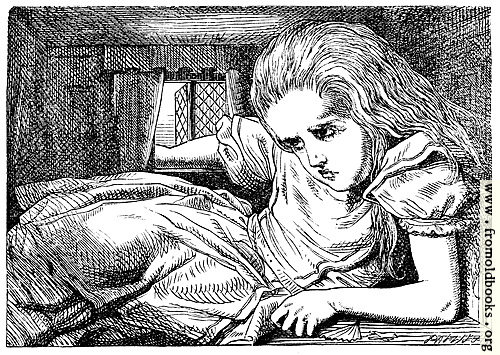 “[...] before she had drunk half the bottle, she found her head pressing against the ceiling, and had to stoop to save her neck from being broken. She hastily put down the bottle, saying to herself ‘That’s quite enough—I hope I shan’t grow any more—As it is, I can’t get out at the door—I do wish I hadn’t drunk quite so much!’

Alas! it was too late to wish that! She went on growing, and growing, and very soon had to kneel down on the floor: in another minute there was not even room for this, and she tried the effect of lying down with one elbow against the door, and the other arm curled round her head. Still she went on growing, and, as a last resource, she put one arm out of the window, and one foot up the chimney, and said to herself ‘Now I can do no more, whatever happens. What will become of me?’ ”