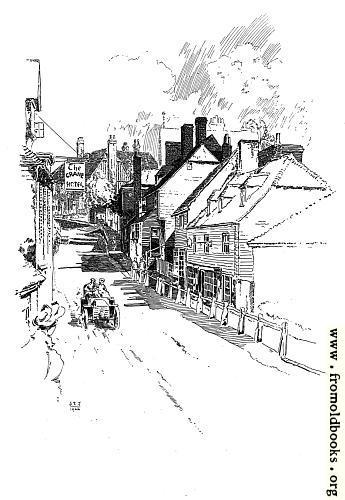 Historic Kent notes about the village of Cranbrook

“Kent, Sussex and Surrey are three of the most delightful counties in England, and three of the richest in cottages that depend for their distinctive character upon the effective use of three, four, and even five materials. A certain number of them are on somewhat similar lines to those in Shropshire and Herefordshire; but it is proposed here to consider more especially the examples of brick and timber, weather-boarding, tile-hanging, and tile roofs in West Kent and Surrey; those roofed with stone at Horsham and the surrounding neighbourhood; those of stone roofed with thatch, found in Sussex; those of flint and stone roofed with tile to the east of Kent; and some of those in Hampshire with tile-hanging and tile roofs. Roughly and briefly, the general character of the early ones is mediæval both in construction and feeling, while that of those later in date is classic in spirit, retaining much the same method of construction and workmanship. This classic – or, to be more accurate, Georgian – spirit which pervades so many of them asserts itself in the proportions, the unbroken eaves, the absence of dormers, and the subordination of the gables that generally break out of the roof at a low level, leaving the main roof uninterrupted between the large chimneys flanking the gable ends, or divided by one large stack in the middle. At Hollingbourne (see frontispiece) and at Witley (opposite page 38) is seen this horizontal character, and also in the cottage at Penshurst (page 20) and those in the foreground of the drawing of Goudhurst (page 17).” (pp. 11, 12)

Another characteristic village is Cranbrook (page 13), and the cottage (page 14) shows a combination of wood and brick and wood and plaster, with pierced and carved barge boards on the overhanging gable ends; in thelater examples these are often placed dierctly on the wall face,as at Wilsley House (opposite page 9), a good type of the half-timber dwellings in and around this village. Most of the early cottages are of timber framing and plaster. The timber, in nearly every case, is of oak, and “the panel is formed by fixing upright hazel rods in grooves cut in top and bottom, and by then twisting thinner hazel wands hurdlewise round them. The panel is then filled up solid with a plaster of marly clay and chopped straw, and finished with a thin coat of lime plater.”1 (p. 19)

Note: the work of Sydney Jones may be covered by copyright laws in some countries. This particular image is out of copyright in the US and Canada as far as I can tell.

interesting...i have some historical bits and old pics on my site
geoff