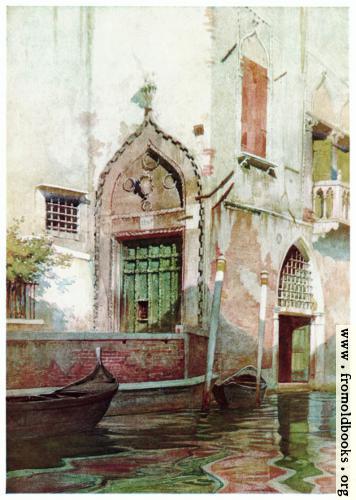 A grand arch in a crumbling wall on the opposite side of a canal in Venice marks an entrance to the palace of Sanudo.

If, before leaving the campo, we make a short journey on foot along the Salizzada which passes on the south of SS. Giovanni e Paolo, we may find a treasure buried in dirt and neglect. None would guess its presence; but those who care for unfrequented paths may venture under the unattractive sotto-portico which leads to the outer staircase of a once beautiful Renaissance palace. It is given over to the poor, but a sculptured doorway still surmounts the stair; its chietf beauty however is a series of delicately sculptured arches in the brickwork below, and a fine well-head half imprisoned by the chimney of a neighbouring bakery. The wall of the bakery is so near the staircase of the palace that we can get no complete conception of the arches, and the dirt and ill odours of this neglected corner are likely to daunt all but the most enthusiastic seekers after treasure. Yet these fragments, in elegance and beauty of design, may rank with the worthiest remains of the Venetian Renaissance. (p. 130)