Sketch of the Decorations of the unfinished South Wing of the New Houses of Parliament.details 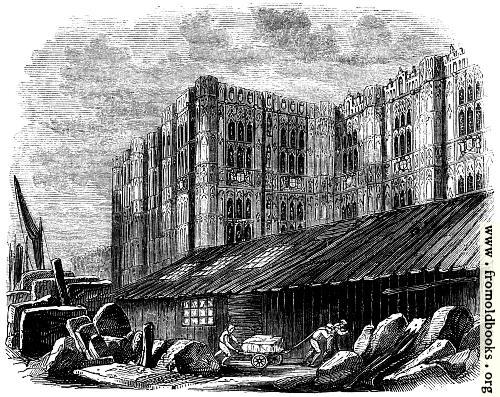 Sketch of the Decorations of the unfinished South Wing of the New Houses of Parliament., in Westminster, London, England more

Sketch of the Decorations of the unfinished South Wing of the New Houses of Parliament.

When this book was published in 1841, the Houses of Parliament building was not finished; the engraving here shows them partly built.

“We should have been glad to have furnished our readers with a view of the exterior, either as it is in its unfinished state, or as it is to be according to the designs of its author; but the objections, we understand (and we must own very naturally), are so decided against the first course as liable to convey inadequate ideas of the whole; and against the second, from the alterations that in the course of the works are constantly being made in matters of detail; that we deem ourselves at once obliged and fortunate in being able to give a sketch even of a small portion of the river front, that may serve simply to indicate the sumptuous character of the architectural and sculpturesque decorations. The whole of this front, with its wings, is now fast approaching to completion; and it may here be remarked, as a proof of the uselessness of copying the original designs, and presenting them as engravings of the building, which we still see from time to time done, that elegant turrets have been substituted for the buttresses originally proposed; that the niches with statues, a most important feature, have been added, and that generally the whole surface has been most surprisingly enriched. Every square yard of it is now a study. The statues, both on the east and on the west fronts (forming the ends of the pile, as we might call them from the length of the latter), represent the same series of monarchs, that is from the Heptarchy to the Conquest; a repetition, we own, of which we do not see the peculiar beauty. Of the statues themselves it is impossible to speak too highly. The arms, coronets, and names in black letter fashion, all in high relief, of every four monarchs (the number comprised in each bay, two above and two below), are grouped together into a most rich-looking piece of workmanship, forming the chief ornament of the broad band of decoration that divides the two chief stories. The smaller statues of the river front comprise all the sovereigns from the Conquest down to Her present Majesty, whose reign will be signalised by the erection of the structure. It was an odd coincidence that the number of places for the statues should be exactly that of the number of statues required to complete the series. Of the two towers, the only portions yet visible are the cluster of arches that are to bear the clock tower, and the massive and most elaborately designed piers of the other, with the crown conspicuously sculptured on each side of the two that will form the entrance. The state of the interior demands no particular mention, as the walls have scarcely yet reached the height of the principal floor, on which are the apartments and halls to which we have referred. It may here be observed that the architect proposes an extension of the original site marked out for his labours, which from its importance in enhancing the effect of the exterior of the pile, and the uses to which the additional space obtained may be turned, is likely enough to be acceded to either at present or at some future time. (p 132)”