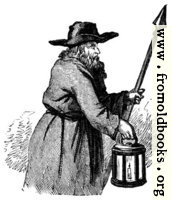 
A bearded man wearing a broad-brimmed hat and wearing a heavy winter coat walks forward carrying a spear in his left hand and a lit lantern, or lanthorn, in his right. [more...] [$] 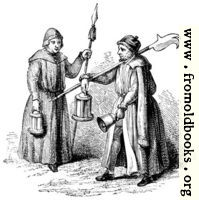 
Two men in long winter cloaks walk the night-time streets of London, each carrying a lantern. One also has a hand-bell and both have spears. The image is credited to “Dekker, 1616.” [more...] [$] 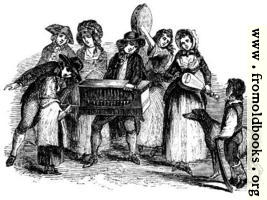 
Dayes, who published a collection of street views about 1789, has given us the group which concludes our paper. Here we have the organ, the triangle, the tambourine, and the hurdy-gurdy,—each striving which should be loudest, and winning by their united exertions the applause of all bystanders. After the peace our thoroughfares gradually resounded with the somewhat improved melody of [...]coiffure accompanied the organ with the monotonous chant of “Le gai Troubadour.” An Italian was now and then imported with his guitar; and his knowledge of harmony compensated for his somewhat cracked voice. All at once glee-singers started up; and they are now common. Then a “noise” or two of really tolerable insrtumental performers were to be found in Portland Place and other streets of the west; and even those who were familiar with Rossini might stop to listen. We are still advancing; and in a few years the Act which protects housekeepers from the nuisance of street musicians will be a dead letter. (p. 143) [more...] [$]