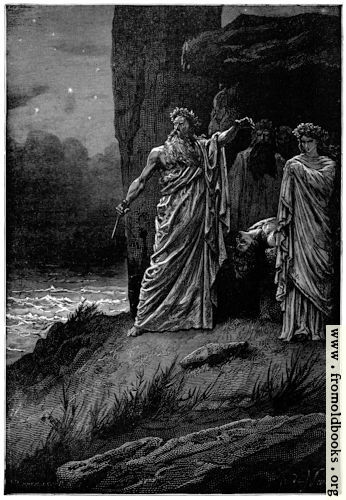 Drawn by A. de Neuville.

The picture is fanciful since the only surviving accounts of the druids of ancient times comes from the Romans who were fighting them, and who did not portray them in positive light.

We see a man with an oak-leaf crown holding a dagger in one outstretched hand, his arm and body tense; his other hand is poised, erhaps, to pull out the victim’s heart. To his left is a Druidess of dour and stern demeanour, and behind them, more bearded men. Between them, on his back, lies the youth about to die. In the background perhaps are giant standing stones such as one might see at Stonehenge, and a turbulent river or perhaps the sea (showing that this is not Stonehenge). The scene is made at night.