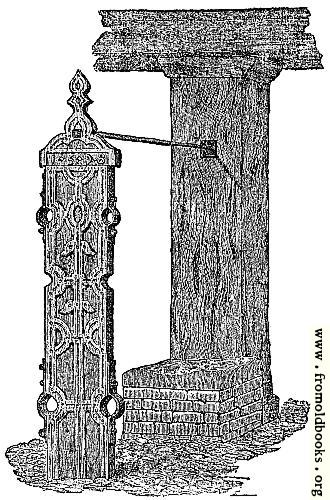 The Anglo-Saxons whipped prisoners with a whip of three cords, knotted at the end. It was not an uncommon practice for mistresses to whip, or have their servants whipped, to death. William of Malmesbury relates a story to the effect that when King Ethelred was a child, he on one occasion displeased his mother, and she, not having a whip at hand, flogged him with some candles until he was nearly insensible with pain. “On this account,” so runs the story, “he dreaded candles during the rest of his life to such a degree that he would never suffer the light of them to be introduced in his presence.” During the Saxon epoch, flogging was generally adopted as means of punishing persons guilty of offences, whether slight or serious.

For a long time in our history, payments for using the lash formed important items in the municipal accounts of towns or parish accounts of villages.

Before the monasteries were dissolved, the poor were relieved at them. No sooner had they passed away than the vagrants became a nuisance, and steps were taken to put a stop to begging; indeed, prior to this period attempts had been made to check wandering vagrants. They were referred to in the “Statute of Laborours,” passed in the year 1349. Not a few enactments were made to keep down vagrancy. In the reign of Edward VI, in 1547, an Act was passed, from which it appears “that any person who had offered them work which they refused, was authorised to brand them on the breast with a V, hold them in slavery for two years, feed them during that period on bread and water, and hire them out to others.” The Act failed on account of it sseverity, and was repealed in 1549.

It was in the reign of Henry VIII, and in the year 1530, that the famous Whipping Act was instituted, directing that vagrants were to be carried to some market town or other place, “and there tied to the end of a cart naked, and beaten with whips throughout such market town, or other place, till the body shall be bloody by reason of such whipping.” Vagrants, after being whipped, had to take an oath that they would return to their native places, or where they had last dwelt for three years. Various temporary modifications were made in this Act, but it remained in force until the thirtyninth year of the reign of Queen Elizabeth, when some important alterations were made. Persons were not to be publicly whipped naked, as previously, but from the middle upwards, and whipped until the body should be bloody. It will be observed [that] the seat for the culprits placed in the stocks was beside one of the immense oak pillars of the market-house. They are now placed with the remains of the Pillory at the entrance of the schoolroom, on the south-west side of the church.” (pp. 194 – 197)

There are a number of other pictures of stocks and other punishments, both with and without people!

This whipping post still exists, currently housed in the Epping Forest District Museum in Waltham Abbey.
This image is historically valuable as it shows what the single hole at the top of the post was used for. The pillar shown was part of Waltham Abbey’s old timber-framed market house, which was pulled down in the 19th century.

I’m in favor of re-instituting whipping as a judicial punishment, as well as a disciplinary measure in schools.