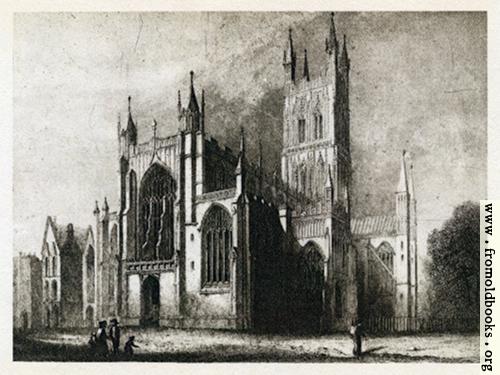 Thompson, A. Hamilton: “The Cathedral Churches of England” (1925)

Gloucester Cathedral was built 900 years ago (it was completed in 1100); it was originally the Abbey of St. Peter, part of a Benedictine monastery. Here we see the towers and spires, the gothic windows, and, in the foreground, some people, giving a sense of scale. This picture is probably a reproduction of an eighteenth-century painting. If it looks like an old photograph, that’s because it is an old photograph.

There is also a wallpaper version without the border.

Although, in the natural course of things, medieval cathedral churches, enriched with large endow­ments and supported by contributions from the people of large dioceses, became great and splendid buildings, size and splendour were nevertheless not peculiar to them. These qualities were shared by the churches of many monasteries and of some of the establishments which we call collegiate. In these also the features of plan and arrangement which we have noticed would be found. Thus the great abbey churches of Gloucester and Peterborough, which did not become cathedrals until the reign of Henry VIII, had all or most of those features which we are accustomed to associate with cathedrals. (p. 2)